One word to describe the experience every time ur in Mainstreet – Ecstasy! If am allowed to use more than one word ‘Death by Food’ would be the tagline i would give them, in the most positive way it can mean! its a foodie’s paradise! The multi-cuisine spread is just beyond description in both variety and quality. Starting from soup to desserts (oh don’t remind of it! check out the pic to know why!). The place inspired me and everyone who dined with me so much that i could not be without writing a review right away.

The ambiance is that of a street in England (assume they were trying to give an Al Fresco feel in the European style with roads laid out and street names on the corners plus balconies over us!). The buffet counter is arranged in such a way that it triggers your appetite instantly. Presentation gets 10 on 10 here! 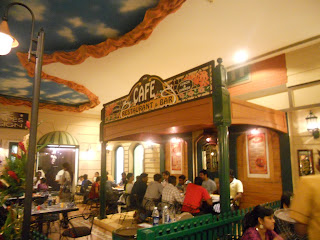 I guess this whole page will be used just to jot down the names of the items served in the buffet. To start, the soup (tomato rasam) was yumm, starters served at the table – gobi 65 and babycorn fry was awesomeee beyond words, we had it reordered some 3 times, which might not have been a great idea in a buffet spread thats this huge but i should confess it was irresistibly yummy. Then there were salads of every vegetable you can possibly think of making a salad with, the sweet dry channa is worth a special mention, something i wanna try at home soon. There was bread and cheese platter, falafel and pappadums too. The main course (vegetarian) was Jeera Pulao, Chef’s Rice (kind of a Biryani), Dal fry, Spicy Potatoes, Noodles, Carrot-bean Stir-fry, Chinese Vegetables, Vegetables in White Sauce (yummy), White rice with Podalanga gravy (i loved this most!), Roti and Naan (served at the table), Paneer gravy, Brinjal  gravy, Mixed Vegetable Curry, Curd Rice with at least 5 varieties of pickles/chutneys, Curd Vada and am sure I missed something :). Other than this there is a live Chaat counter where you can get your dose of Bhel Puri, Sev Puri, Pani Puri, Papdi Chaat or/and Pav Bhaji. 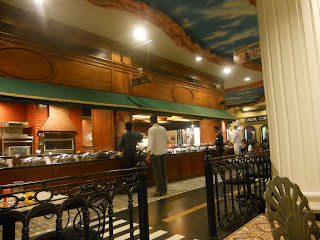 Alright now if you are sane enough after (even having one spoon) of all that, there comes the dessert part and the best part of the entire dinner! Now I guess the pic explains it better i can try best in words (but pic hasn’t covered the entire dessert section and lighting not that great either), and since i cant remember so many names, I would like to sum it up as a huge selection of fruits (cut and whole), orange juice, icecream (6 flavors in cup or cone and some 10 toppings/sauces), at least 10 varieties of cakes and puddings (fluffy and yummy!) in various flavors and forms, Indian sweets like Jelebi (the best!), Gulab Jamun, Bengali sweets, Payasam and so!

The best part is they gave a complimentary birthday cake over and above these!! Pretty good service with a smile for such a crowded place and good enough for a buffet, could have been faster, but who wants to complain when concentrating on such a huge spread? Am so tired just typing these out of my fresh memory! 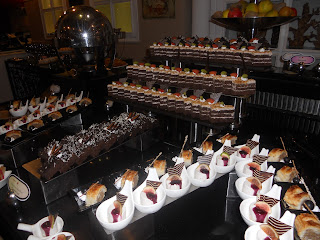 Now I have written only on the vegetarian dishes, just imagine the variety for people who access the non-vegetarian section too!

Mainstreet deserves all the compliments you bestowed upon it. Its one of those few buffets in Chennai that my foodie hubby and me have revisited. Their desert spread is one the best.

Looking forward for 'your' review on Fusion9 too, if you visit it..