This used to be the easiest and fastest recipe i make. But yes i always use the bhel puri sauce available in almost every food mart. But this time around i cudnt find the sauce anywhere (have they stopped making it?) and waited a few days until our bro was desperate to have the bhel puri one day and i had no choice but to make the sauce myself! And surprise! It came out awesome!!!! So here it is for ur tasting pleasure, bhel puri from scratch in minutes!

Ingredients
Bhel (Puffed rice) – 5 cups
Small Puri’s – As many as u wud love to have
Sev/aloo bhujia – 2 cups
Potato – A big sized one, well-boiled
Tomatoes/Onions – 1 or 2
Coriander – a small bunch 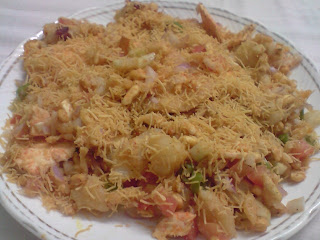 Method
Take a huge bowl, mix the bhel, some puri, some sev, the potato, some onion and tomato and mix really well with your hands so that the potato mashes well with the rest.
Make a paste out of the tamarind and grind it with the dates.
Add salt and jaggery and blend well.
Now make the green chutney by blending all the ingredients well.
Mix both the chutneys slowly into the bhel mixture and keep whipping.
Proportion the sauce and the mixture until you feel that the bhel puri looks semi-dry.
Add more onions, sev and puri and mix well again to make it dry.
Sprinkle lots of finely chopped coriander and serve!