Wow its been more than 2 months i posted a recipe here.. didnt get a chance to even write a line since i came bak to india.. have over a hundred on draft.. n i definitely don wanna let this blog die too like i let the other ones in sansmerci.in! This is the only place m still stickin to writing.. personal writing.. well almost.. wats the news after comin back to India? Well nothin much except that we ve been really realy busy especially in the weekend i ve packed them so horribly that we ve no time to breathe.. finally this week due to cancelation of some plans.. i ve sometime to actually sit down to write something.. yes i kno this blog has been my company in times when i was totally jobless! so here i am stickin to it..in times wen i don even ve time to eat anymore leave alone cook! thanks to Brat for cookin a million things wen we were in UK.. my drafts are flooded.. so here again its his recipe (yes m seriously considerin changin the name to Brat’s kitchen!!) well as i always say.. the happiest times in our life has been while cooking together.. and this blog will serve a good memory of the same (incase in future we stop cooking :P)

Cuttin the crap. heres a yummy bread pakora / bread bajji recipe from Brat..bringin bak happy weekend memories from UK.. cookin n havin our own lil lawn party with friends and their kids after that! Also reminds me of the mouth-watering Bread Pakoras we used to have in Delhi.. the Bread Bajjis in Chennai are a style of their own… but i ve to agree the Northie version is a taste to cherish! The Pudina Chutney layered in between makes all the difference! This is Brat’s own version of the Indian street-food delicacy, served hot… rite from the frying pan… 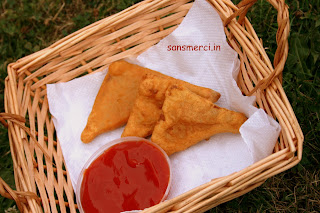 Method
In a bowl, mix all the ingredients except the oil, add water enough to make a batter.
Cut the crust off the bread slices, cut in halves, dip in the batter.
If you are using the pudina chutney, layer and spread between two slices.

Dip the slices in the batter and deep fry in pre-heated oil.

Keep the flame in medium, lest the bajjis burn.

Back to back from Brat’s kitchen coming up!