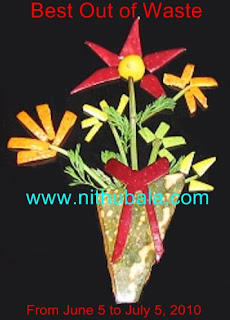 This is a recipe tried for 2 reasons 1. cos i din wanna cook potato cutlets fried in oil, wanted a healthier option and what striked me first is the mashed potatoes healthy substitute made out of cauliflower and 2. for this event hosted by Nithu at Nithu’s Kitchen on Best out of Waste and so the plan moved on trying out with cauliflower stalks instead of the florets and was sure it would be more mashier than potato!! So that’s exactly how this experiment started and i had no idea that it would turn out this awesome that i would actually publish it, all thanks to brat i should say, else i would ve definitely screwed it up somewhere! 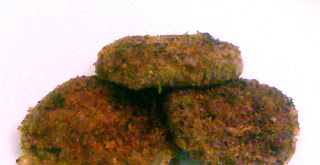 Method
Boil the cauliflower stalks and peas in 2 cups of water until they are really mashable.
Add the powders and salt, cook and mash well.
Meanwhile, remove crusts off the breads and place them in a pre-heated oven until they are crispy and browned.
Grind them in a mixer to make bread crumbs.
Make balls out of the mashed mixture and flatten to make cutlet shapes (or use a mold).
Coat each cutlet with little oil and dip it in the bread crumbs.
Make sure its well coated on all sides.
Pre-heat oven at 220 degrees and bake for around 20 minutes.
There you got healthy hot cutlets, serve with tomato ketchup!

You can also a bit of corn flour while making the mash in case they are not consistent enough to hold together.