I think the headline sums it up. Middle of the night delivery does really thrill the foodie in me so much and especially when you see such a huge menu like a regular restaurant does… yay! But it was a complete let down, I should say. There used to be the place called dawn and dusk that did do all-night delivery of food and had the worst of anything I have ever tasted in Chennai city. Well in comparison, Twilight is far more better. But I think they had to shut down dawn and dusk pretty soon than they started.

The menu has everything from North Indian to Chinese to quick bites. There are combos which make life easier for you to choose, say a chinese fried rice with a manchurian type. But if you are craving really quality food, its better not to even think of ordering from here. It is of course a midnight street side fast food that has a unique home delivery feature. That’s the picture you get when you take the first bite of the biryani. 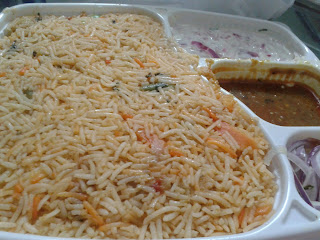 To be fair, it was a good tomato rice. But nevertheless, not one for vegetarians, i guess the oils used are all the same. Other dishes we tried were, egg burji, rotis and a mutter paneer side dish. Nothing is worth mentioning either, a little too spicy for anybody’s taste. Egg Burji was the only dish that was palatable. Considering which, the non-vegetarian dishes should be pretty good in here. I also suggest the Chinese (Indo-chinese rather) from here since their expertise definitely seems to be in those areas, better stay off biryanis, weirdly enough that’s what they claim to be experts in!

Well, unless you are looking for cheap street side after-party spicy fill-me-up-fast food 🙂