For once.. i wanna put up a recipe before the function gets over.. so at least it ll be useful for ppl who search for the recipe to make it on the special day.. so yea… this Venn Pongal recipe is a bit different from the usual Pongal we make for breakfast at home. This ones typical temple-style Venn Pongal, usually given as prasadam. Many of us love it but wonder how it is so different from the restaurant-style Pongals. Well mom learnt the secret from a temple and let me know about it.. and i tried it.. bingo! it came out exactly the same way and it was as easy as making instant noodles! i decided it ll be perfect to make on this pongal day.. so here we go… Venn Pongal Recipe… 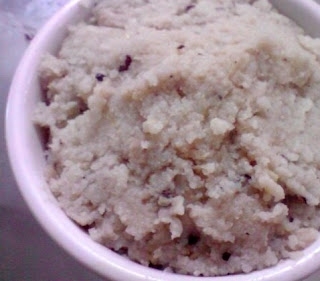 Method
Add the rice, dal, water, salt, pepper, ghee and jeera powder in a cooker and let it cook.
Remove from heat and smash the rice well into a pongal, it should be very easy to do since u have added lots of water.
You may add the salt and pepper while the rice is half cooking, in case ur using a rice cooker.
The aroma that arises when the rice is cooking is truly heavenly!
Roast the cashews in ghee and add to the pongal.

Now can there be an easier recipe for than that?